Insular Dichotomy in the Implicit Detection of Emotions in Human Faces 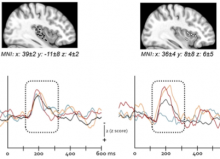 The functional roles of the insula diverge between its posterior portion (PI), mainly connected with somato-sensory and motor areas, and its anterior section (AI) connected with the frontal, limbic, and cingulate regions. We report intracranial recordings of local field evoked potentials from PI, AI, and the visual fusiform gyrus to a full array of emotional faces including pain while the individuals’ attention was diverted from emotions. The fusiform gyrus and PI responded equally to all types of faces, including neutrals. Conversely, the AI responded only to emotional faces, maximally to pain and fear, while remaining insensitive to neutrals. The two insular sectors reacted with almost identical latency suggesting their parallel initial activation via distinct functional routes. The consistent responses to all emotions, together with the absence of response to neutral faces, suggest that early responses in the AI reflect the immediate arousal value and behavioral relevance of emotional stimuli, which may be subserved by “fast track” routes conveying coarse-spatial- frequency information via the superior colliculus and dorsal pulvinar. Such responses precede the conscious detection of the stimulus’ precise signification and valence, which need network interaction and information exchange with other brain areas, for which the AI is an essential hub.